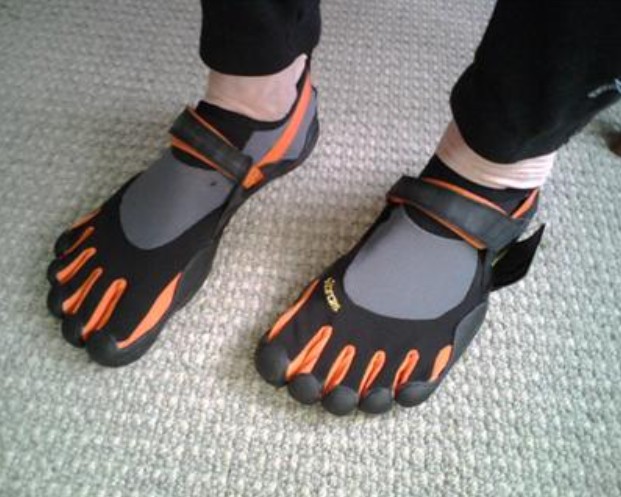 I love the concept of running barefoot and in minimalist footwear, and agree completely with the premise that shoes with a raised heel (i.e. – most ALL running shoes) allow and/or cause people to adopt an improper stride (heel-strike).

I’ve been trying to make the conversion away from heel-striking since last summer (about 9 mos). I began by using a pair of Newtons, which have a thicker forefoot and allow a mid-foot landing. The calf pain was pretty bad initially, but gradually I worked up to 6 or 7 miles. I actually ran PRs in both 5k and 10k races in the Newtons. I was forced back into my Asics trainers (AKA “moonboots”) as I was training for a 50k and a marathon in a few months, and didn’t think I could try to go that distance in the Newtons.

Then I read The Book (Born to Run) in the fall, and became convinced that VFFs and barefoot were the way to go. I started running BF on an indoor track. I began with about 0.2 mi, three times per week. I added a 1/10th of a mile each week, and was able to work up to 2 mi without any pain. During this time I was still doing my regular runs in my “normal” shoes. I got VFFs in February, and decided to make the change and ditch my Asics.

I was running about three times per week in the VFFs, and got up to 3 to 5 miles per run. I occasionally added a short (1/2 mi) BF run on pavement. I think I overdid the mileage, however, at least my Achilles’ tendon thinks so! I’m now back in my Asics for a couple of weeks to try to get the AT healed, then I plan to start over. Then, now that it’s warmer, I may resume completely BF, then move into the VFFs when I can run at least a mile BF.

What I learned:
– Start with short distances, then increase VERY gradually.
– Run on a hard surface, not soft surfaces like grass or sand. The hard surface teaches proper form, while soft surfaces allow heel-striking and hard landings to continue.
– try to start completely barefoot! This will force you to keep the distance short. As your foot toughens, you’ll be able to handle longer distances without overstraining your Achilles’ and calves.

Join in and write your own page! It’s easy to do. How?
Simply click here to return to Running Barefoot.