Looking for a new motto? Want to print something on the back of your teams T-Shirt? Find it her, and then build a customized T-Shirt. tips4running.com is partners with Uberprints so you can Create Custom T-Shirts Online. FREE SHIPPING on all orders over $100! Add your any image, or even your team logo on the front, and add an excellent quote on the back. 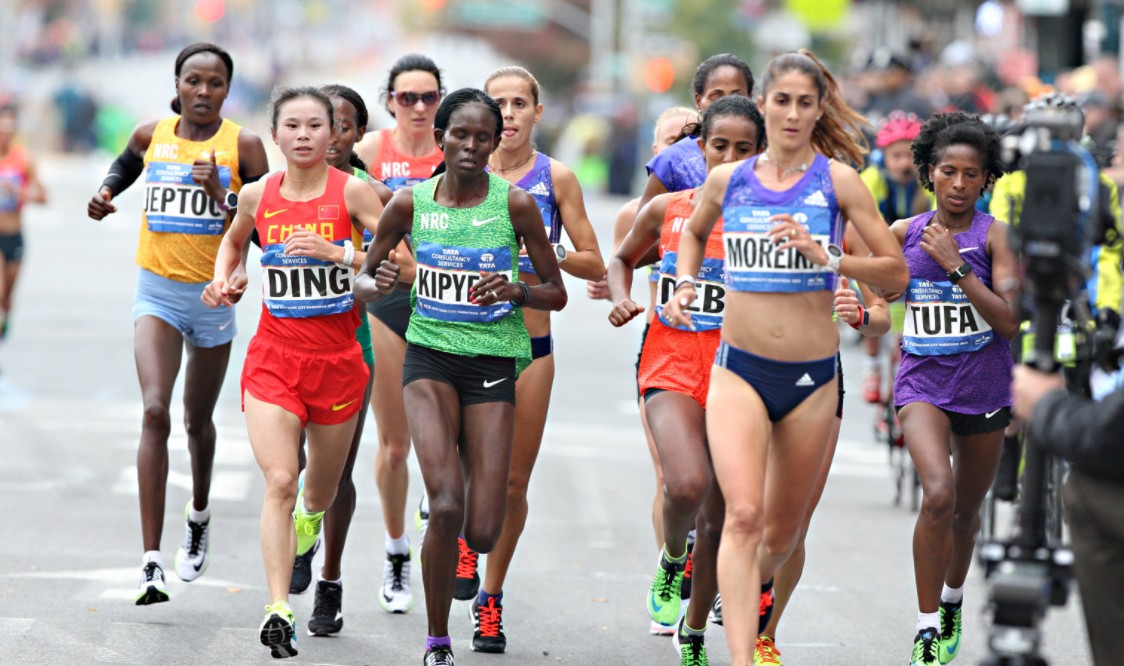 I hated every minute of training, but I said, ”Don’t quit. Suffer now and live the rest of your life as a champion.”
– Muhammad Ali

Every morning in Africa, a gazelle wakes up. It knows it must outrun the fastest lion or it will be killed.Every morning in Africa, a lion wakes up. It knows that it must run faster than the slowest gazelle, or it will starve.It doesn’t matter whether you’re a lion or a gazelle when the sun comes up you’d better be running.
– Anon

Champions do not become champions when they win the event, but in the hours, weeks, months and years they spend preparing for it. The victorious performance itself is merely the demonstration of their championship character.
– T. Alan Armstrong

The greatest pleasure in life, is doing the things people say we cannot do.
– Walter Bagehot

Cowards die many times before their deaths, the valiant never taste death but once.
– Julius Ceaser

Our greatest glory is not in never falling, but in rising every time we fall.
– Confucius

All it takes is all you got.
– Marc Davis

Run like hell and get the agony over with.
– Clarence DeMar

The five S’s of sports training are: Stamina, Speed, Strength, Skill and Spirit; but the greatest of these is Spirit.
– Ken Doherty

The only tactics I admire are do-or-die.
– Herb Elliott

No one ever drowned in sweat. Gold medals aren’t really made of gold. They’re made of sweat, determination, and a hard-to-find alloy called guts.
– Dan Gable

The body does not want you to do this. As you run, it tells you to stop but the mind must be strong. You always go too far for your body. You must handle the pain with strategy…It is not age; it is not diet. It is the will to succeed.
– Jacqueline Gareau

No negative thoughts cross my mind on race day. When I look into their eyes, I know I’m going to beat them.
– Danny Harris

Ability is what you are capable of doing.
Motivation determines what you do.
Attitude determines how well you do it.
– Lou Holtz

The will to win means nothing without the will to prepare.
– Juma Ikangaa

It is true that speed kills. In distance running, it kills anyone who does not have it.
– Brooks Johnson

My thoughts before a big race are usually pretty simple. I tell myself: “Get out of the blocks, run your race, stay relaxed. If you run your race, you’ll win… channel your energy. Focus.”
– Carl Lewis

If you believe in yourself and have the courage, the determination, the dedication, the competitive drive and if you are willing to sacrifice the little things in life and pay the price for the things that are worthwhile, it can be done.
– Vince Lombardi

Only think of two things – the report of the pistol and the tape. When you hear one, run like hell until you break the other.
– Sam Mussabini

It is simply that we can all be good boys and wear our letter sweaters around and get our little degrees and find some nice girl to settle, you know, down with… take up what a friend of ours calls the hearty challenges of lawn care… Or we can blaze! Become legends in our own time, strike fear in the heart of mediocre talent everywhere! We can scald dogs, put records out of reach! Make the stands gasp as we blow into an unearthly kick from three hundred yards out! We can become God’s own messengers delivering the dreaded scrolls! We can race dark Satan himself till he wheezes fiery cinders down the back straightaway… They’ll speak our names in hushed tones, ‘those guys are animals’ they’ll say! We can lay it on the line, bust a gut, show them a clean pair of heels. We can sprint the turn on a spring breeze and feel the winter leave our feet! We can, by God, let our demons loose and just wail on!
– Once a Runner by John L. Parker

Don’t look back. Something might be gaining on you.
– Satchel Paige

Workouts are like brushing my teeth; I don’t think about them, I just do them. The decision has already been made.
– Patti Sue Plumer

I race to win. That’s the point.
– Dathan Ritzenhein

When you get to the end of your rope, tie a knot and hang on.
– Theodore Roosevelt

I had as many doubts as anyone else. Standing on the starting line, we’re all cowards.
– Alberto Salazar

It is a rough road that leads to the heights of greatness.
– Seneca

Ask yourself: “Can I give more?” The answer is usually: “Yes”.
– Paul Tergat

Do a little more each day than you think you possibly can.
– Lowell Thomas

I prefer to remain in blissful ignorance of the opposition. That way I’m not frightened by anyone’s reputation.
– Ian Thompson

In the long run, men hit only what they aim at. Therefore, they had better aim at something high.
– Henry David Thoreau

Everyone in life is looking for a certain rush. Racing is where I get mine.
– John Trautmann

Success is to be measured not so much by the position that one has reached in life as by the obstacles which he has overcome while trying to succeed.
– Booker T. Washington

Running is real and relatively simple, but it ain’t easy.
– Mark Will-Weber

Once you’re beat mentally, you might as well not even go to the starting line.
– Todd Williams

Remember, you can make your own Running Quote T-Shirt with tips4running and Uberprints.com!