Joe Walczak talks to tips4running about the half marathon

Joe Walczak is my cousin. He wasn’t a runner in high school or college, but two years ago he decided to run a half marathon. This spring, he ran his second half marathon.

I interviewed him to find out why he started running, and what was it like training for his races. The picture to the lower-right is of Joe running in the Las Vegas Rock and Roll Half Marathon.

David Tiefenthaler – Hello Joe! It’s good to hear from you. What is new in your world out in Las Vegas?

Joe Walczak – Let me start by saying how excited I am that you asked me to be an interviewee. We have a whole bunch of changes going on in Las Vegas. I have a great new job and we have a new expansion underway on my vegetable farm. Both of which I am very excited about.

DT – You are relatively new to the world of running, but you have been involved in sports for a long time. What athletic activities did you participate when you were younger, and what did you enjoy the most?

JW – I have competed in sports in one form or another since I was 4 years old. I started in basketball and tee-ball. I played those as youth sports in the community. When I reached junior high and High school I played basketball, baseball, lacrosse, and football. I wrapped up with some time on my college basketball team at the State University of New York at Oswego. Basketball was my favorite.

DT – What motivated you to take up running as a hobby?

JW – After completing college I had several friends that competed in marathons. They would often tell me to run one myself but I never thought that I could. Years later and living in Las Vegas my future wife and some friends decided that they were going to run the Las Vegas half marathon and decided that I was goping to go for it.

DT – Was getting started running pretty tough? Why did you stick with it even though getting into shape can be very challenging?

JW – It was very difficult to get started. My good Friend Jordan Thomas, who is a seasoned Boston Marathon runner, once told me that he was surprised and proud of me for doing the half marathon because when we were in our early 20’s I would only run if someone was chasing me.

In the real world it is often challenging to find the time to exercise with our busy work and social schedules. I had been doing more of the work and socializing than the exercising. The most difficult part is getting through the first week or two. Once you start to realize progress and get past the soreness it gets easier. I don’t think it will ever be easy to run 13.1 miles. I found that having a partner in training helps to motivate you. I don’t normally run with my wife because we travel at different speeds but the motivation to get out of the house and start was all I needed to stick with it.

DT – Did you train for the ½ marathon so you could lose weight? How much weight did you lose total as you trained for your races?

JW – My motivation to run the half marathon was more of a personal challenge. I knew the weight loss would come. Run 5 times a week with a healthy diet and you can’t help but lose weight. I think I lost 15 to 20 pounds during my training.

DT – Did you run or train for your first ½ marathon with anyone else?

JW – As I mentioned earlier my wife ran my first half with me and we helped motivate each other to get out and run. It can be very challenging to go out and run after a long day at work. Having someone else to give you a push out the door helps.

My second half I ran with my friend Adam. He lives in Menlo Park, CA and has Ulcerative Colitis. The new Las Vegas Rock and Roll marathon has a charity sponsor for that disease. We both trained and completed the half marathon in December 2010. My motivation for that was Adam. He had a flare up of his UC during training and did his best to get out and walk and run when he could, if he could find the strength to train then so could I.

DT – Did having someone else to train with and share the experience of running a half marathon make it more enjoyable?

JW – Running is a very solitary and challenging sport, but having someone running alongside you or motivating you during training makes it much easier and much more fun. You can also trade war stories afterwards.

DT – I live in a totally different climate here in Wisconsin for running compared to Nevada. Do you have to run early in the morning if you are going to run in the summer to beat the heat?

JW – I don’t do much running in the summer. It is often in the 90’s and sometimes close to 100 degrees late at night and early in the morning. I would compare it to running in an oven.

DT – Is it really nice weather to run in during the winter months?

JW – Outside of July and August the weather is very nice for running. My only problem with the winter is how early it gets dark. I don’t get home early enough to run in the light.

DT – Did you follow a specific training program when you were training for the half marathon? If you did, what one was it?

JW – I did follow a program for both of the races. It was by Hal Higdon and it is a training program for novices.

DT – What was the most difficult part of the training schedule you followed?

JW – The most difficult part is the long run each week. They always challenged me.

DT – What was the longest run you did leading up to the ½ marathon race?

DT – Were all the workouts that you did just distance runs, or did you do some different types of runs, like walk and run, or run at a faster pace for some of your training? Did you mix in any cross training?

JW – The first 2 weeks I had no choice but to walk and run. After that I learned that I needed to settle in to a pace that challenged me but that I was able to sustain through the entire run. As my endurance increased on the shorter runs I would push myself to go as fast as I could and on the long runs I just wanted to run the entire time. As the program I followed recommended I did incorporate weight training a couple days a week.

DT – How did your legs hold up as you were training? Did you have any injuries or any nagging pain in your legs?

JW – Luckily I did not have any injuries. I would experience some soreness after a long run but nothing that a day’s rest followed by a run could not get rid of.

DT – You’ve done the half marathon twice now. Which one was more enjoyable at the finish? Did it feel better to cross that finish line the second time, or the first time?

JW – Looking back, the first time was pretty easy. I had so much adrenaline going that I could have gone another couple miles. The second race was different. I lost my steam at mile 10 and had to battle to run the final 3.1 miles. I felt like crying when I crossed the line. It was so difficult but I managed to dig deep and finish strong, at least as strong as I could. The second time definitely felt better.

DT – Why did you settle on the ½ marathon for a race. Did you ever run any shorter races like a 5k, or do you plan on running a full marathon in the future?

JW – I did the half because everybody else was doing it. I am not sure if I am built for a full marathon but I am not ruling it out. In preparation for the first half I ran 2 5k races as a part of the training. The second I did not run any races because my wife plans those types of things and she did not run the second half marathon.

DT – Thanks for sharing Joe. One more question, but this is about your other hobby, how’s Joe’s Farm looking in 2011?

JW – Thank you for asking. Joe’s Farm is doing great. Here’s the Joe’s Farm Website. We have much different growing seasons in Las Vegas than what you experience in Wisconsin. We are nearing completion of an expansion that will more than double the size of the farm. Those affiliated with the farm and those that the farm feeds are very optimistic about the future of Joe’s Farm. We just harvested our winter crops, the spring crops are developing better than expected, and the summer crops are coming soon. Thanks again for having me on your site. 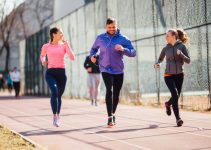