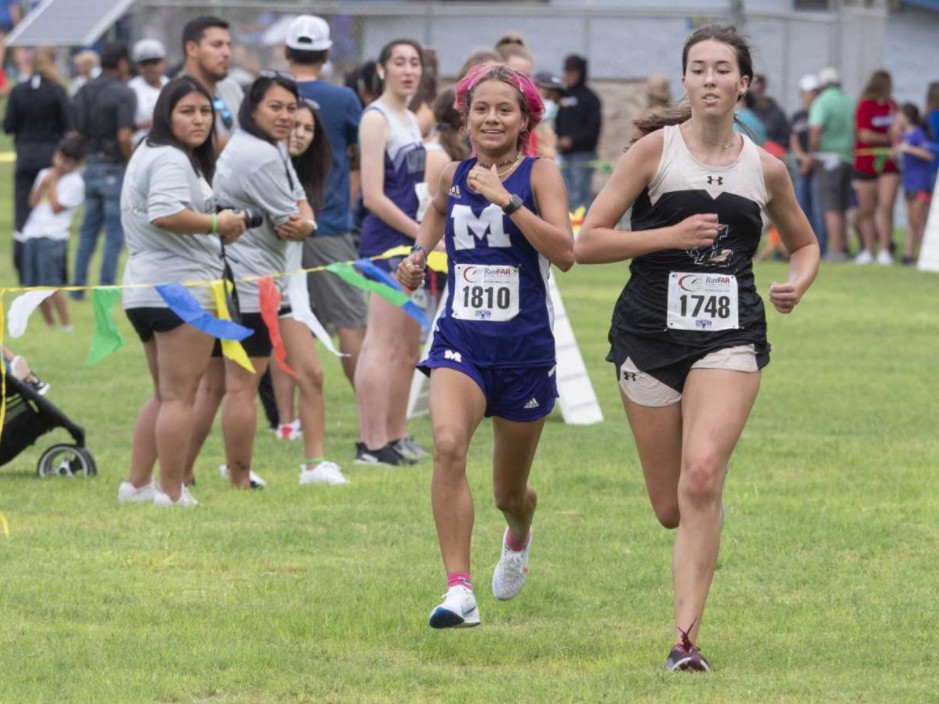 My son is new to CC, he missed almost all of this year’s pre season, because of circumstances beyond his control (meaning, it is not because of his lack of desire) but he has set himself a goal and is working toward meeting that goal. My son is 16, he is 6′ tall and currently weighs about 120# (he was up to 122, but has lost some weight since he started training, we are working to make sure he does not loose any more weight by addressing his dietary needs now that he is exercising so much.)

My son’s goal is that he will complete an olympic triathalon before he graduates from high school (he is a sophomore this year). We are hoping that he will be able to do a sprint triathalon next summer. He set this goal and then started working toward that goal by getting into CC, he will do swimming and then track during the school year, we live in Ohio so biking will take a back seat to the rest of his work until the weather gets nicer in the spring, but I do not anticipate too much of a difficulty (and this is the one area that I can actually help him out since that was my chosen sport as a teen and young adult).

My son has completed two races, so far. His first race he set a goal that he wanted to complete the race in under 30 minutes, his time was 27.15. I was able to see his stride and I remember some things that my father (he was the runner) was told by his coach that I heard when I went to a few of those meetings about his stride (my son’s stride was EXACTLY like my father’s! It was really something to see, my dad died 5 years before my son was even born, too!) So I suggested to my son that he might try loosening up as he runs, keeping his arms closer to his hips and letting them aid his momentum-“shoot from the hip” was how I described it to my son (I probably got that from the coach, I was a young teen when my dad was doing this, so I don’t specifically remember a lot), to push off from his back foot a bit more and keep the image of a running deer in his mind as he runs, loose and effortless to eat up the miles. I also got him some properly fitted trainers from a shop that caters to runners and he got a pair of spikes. My son argued with me about my suggestions, but the following Monday he went ahead and tried them at practice and when i picked him up I was thrilled to hear him say that he had the best run of his life at practice. He continued to have awesome practices and last Saturday he ran, and despite a little SNAFU at the finish line where the finish line was moved up about 20 feet and my son missed most of his finishing sprint he finished with a time of 23.45! Needless to say, he has managed to get the attention of his coach, and he is feeling FABULOUS!

I have an appointment for him with the OSU Sports Medicine Clinic to have a gait analysis done. My concern is to make sure that my son does not get injured and it seems to me that making sure he has a good gait and does not develop any bad habits right now is a way to do that. This is an additional $125 investment, but if it prevents injury, it will be worth it. Given my son’s tall, thin physique (his dad is also very tall and thin, when we married he was 6’9″ tall and weighed 180# with a waist of 32) I want to make sure that my son’s long skinny legs do not get hurt. His dad trained for a single summer and he completed a marathon, but he injured himself and now he is having severe problems (some of which are related to a congenital abnormality that my son does not have) and will have both hips replaced before he is age 45. I believe that running exacerbated his problems.

My son does not do a lot of core work, and I am thinking that is an area that needs to be addressed. His coach only has them do some sit ups and push ups at each practice, which is good, but I think that maybe some more would help.

My question is, am I focusing on the appropriate areas, and what would you suggest I work with him on, next? Do you think that a gait analysis is worth the money, at this stage of the game (understanding that CC is half done now)?

You are doing a lot of things right for your son. The main thing is to stay positive and enjoy the improvements that he will see. The toughest part of CC or running for that matter is when you plateau and don’t see improvements every week. That will happen eventually, so stay positive even during these periods.

As for the gait analysis, I say go for it. He is early in his running career, and the number two cause for injury is poor running form. The number one, by the way, is overuse. It is way easier when your son is younger to alter his gait, foot strike pattern, and the way he holds his posture as he runs.

If you feel he could do more core work, I have an article with some different things to strengthen his abs. Surprisingly, push-ups are also a good way to build core strength, so your coach is pretty much right on for keeping his upper body and core in good fitness.

Here is the article on core strength along with some suggested exercises.

A few other notes. That is so cool about how your son’s stride looks like your father’s. It is very good to have goals outside of the regular CC season, so keep training and stay positive, and your son will definitely be able to complete an Olympic distance Triathlon. Immediately after the season ends, don’t be afraid to take a few days or a week off of running. Maybe swim or bike during this week to let his legs fully recover from a season of running races. 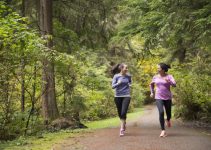 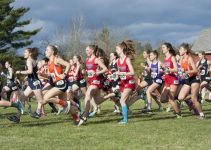